Many people laugh at me when I say that I follow pro wrestling. “You know it’s fake,” they say. My response is often, “well, you follow politics.”

For readers who don't get the, joke here it is: modern politics is no more real (arguably less so) than pro wrestling. This was no more clearly on display this week when Joe Biden selected Kamala Harris as his running mate.

You may remember during the Democratic primary debates when Kamala Harris attacked Joe Biden’s record on race and implying his support for segregation? That seemed pretty personal. But now they’re best buddies.

In wrestling, that’s what we call kayfabe.

What about when Harris said she believes the women accusing Biden of inappropriate behavior towards them. Is that just water under the bridge?

Of course, that was just part of her shtick, which every pro wrestler…I mean politician…needs.

And what about the criticism throughout the primary about Kamala Harris’s record as a prosecutor?

This record remains inconsistent with today’s movement for criminal justice reform (or the issues being pushed by Black Lives Matter), but the media and Democratic Party seems to have completely forgotten that. Why?

It’s because that criticism as all part of the old storyline, when Kamala Harris was a heel. She’s since had a face turn.

The Democratic Primary was no different than the build up to Wrestlemania—just a little less authentic.
Posted by Nathan Benefield at 8:29 AM No comments:

Ranking the Boxers in the Rocky Universe

In anticipation of Creed II, I thought it appropriate time to evaluate all the major fighters featured in the Rocky Movies (Rocky I-V, Rocky Balboa, and Creed). Here is my definitive ranking:

While he had become champion at some point, his struggle to defeat a 61-year old Rocky Balboa (who was coming back from a 20-year retirement) costs him any credibility.

Critics called him a “paper champion” who got the belt despite having never beat Balboa. They were right, and he quickly surrendered the title to Tommy Gunn.

Maybe he is a better fighter that his reputation, but his reputation is that of a loser. He had a meteoric rise to the top, and beat Union Cane to become heavyweight champ. But his decision to abandon Rocky Balboa as his trainer spelled the beginning of the end. After his loss to the 41-year old, retired Balboa in a street fight, Gunn was done.

Conlan is one of the toughest to rank, given we’ve seen so few of his previous fights or his training. His rise to light heavyweight champion and split decision win over Adonis Johnson (Creed) put him here.

Notwithstanding his split-decision loss to Conlan, Johnson has the look of a future champ. He deserved to win the fight with Conlan, has the pedigree and skills to get better, and is the youngest fighter on this list. With time (and perhaps with a viewing of Creed II), he may rise in these rankings.

Drago may be the most overrated boxer in the Rocky universe. He had tremendous punching power, and was incredibly hyped—thanks to the Soviet propaganda machine. But his strength was due in some part to steroid use, and a government sponsored training regimen. His win over Apollo Creed—killing Creed in the ring—was impressive; but Creed was 43 and had been retired from boxing for nearly 9 years by the time of the fight. His also nearly went the distance with Balboa, but was knocked out by the smaller, quicker Rocky (though Balboa was already 40) in the 15th round.

Clubber Lang was arguably the most impressive fighter in his rise to the top. He won his first 29 fights, all by knockout. Lang was some impressive, that Mickey tells Rocky “you can’t win Rock, this guy will kill you death inside three rounds…this guy is a wrecking machine”. Lang was intense, predicting “pain.” In the first match with Rocky, Mickey and Lang proved right, as Clubber dominated Balboa, knocking him out in round two.

But it’s the rematch that cost Lang a higher ranking on this list. Balboa got a second fight with Lang less than a year later. Balboa used a new strategy, capitalizing on Lang’s intensity and anger, and exposing his lack of stamina. Balboa—never considered a great mental fighter—outsmarted Lang with a “rope-a-dope”-like strategy. Balboa’s third round KO was the end for Lang, who seems to have quit fighting immediately thereafter. Lang may have been the best boxer on paper, but didn’t have the heart of Balboa.

The protagonist of the Rocky movies is the most difficult to rank. He lost a whopping 23 fights (more than all the others on this list combined), many of those to journeymen fighters. He was never considered a great in-ring tactician, nor was he the most impressive athlete. He was never even considered a contender, until getting a random chance at the title against Apollo Creed.

Still, Balboa is considered one of the greatest champions, and has three of the most impressive wins. He shocked the world by going distance with Creed in his first title opportunity. He first won the title from Creed in a rematch a year later, handing Creed his first defeat. He knocked out the previously unbeaten Clubber Lang to earn the belt the second time—a remarkable comeback from their first fight. And he knocked out Ivan Drago and single-handedly ended the Cold War.

What Balboa lacked in physical gifts, he made up in heart, being able to take a beating and keep on going.

There is a reason why Rocky was such an underdog—Apollo Creed was better than him. Creed was 48-0 before losing the title. He beat the younger Balboa in the first fight, and nearly won the rematch, before an improbably 15th round KO by Balboa. His only other loss—resulting in his death—was at age 43, after an 9-year hiatus from boxing. Notably, Creed also took the third, unofficial fight with Rocky, as admitted by Balboa to Adonis Johnson years later.

Winning two out of three fights from Balboa is good enough to top this list. He was better physically, a better in-ring tactician, and a better showman than Balboa.

The tables below shows polling presidential and US Senate polling in 10 swing states that also have key Senate races.

What to make of this? I have two conclusions

Second: Conservatives should focus their energies on down ballot races. As the numbers show, there are a number of Senate races that will go down to the wire. I’m not arguing the Presidential race is necessarily decided—a lot can happen between now and Election Day. But I am suggesting that if we want to hold Hillary Clinton in check as President—and I would argue we need to hold Donald Trump in check just as much—these Senate races are critical.

If we want to ensure conservative justices on the Supreme Court, the Senate is where that action will happen. If we want to repeal Obamacare, controlling Congress is essential to that. And if we want conservative policy victories, it is the down-ballot races—Senate, Congress, and state houses—that will be most critical to our success.

Posted by Nathan Benefield at 8:40 PM No comments: 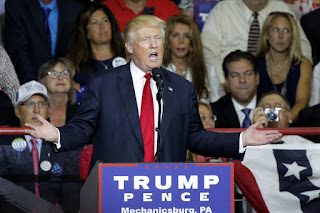 I agree. Conservatives shouldn’t feel the need to defend Trump from every point of criticism or support everything he says no matter how ridiculous or un-conservative. It is our job to call it like we see it and stay true to our principles.

Where I disagree with Shapiro is the idea this is a new expectation with Trump.

Too often, conservatives defended McCain and Romney, even when they offered big government policies or made indefensible gaffes. Conservatives tacitly endorsed the un-conservative policies of George W. Bush—going along with Medicare Part D, No Child Left Behind, the explosion of earmarks, multiple “stimulus” packages, the bank bailouts and uncontrolled spending increases. And it became heresy—certainly “unpatriotic”—to question his war strategy.

Building a multi-billion-dollar wall isn’t a conservative priority. Waterboarding—based on the logic that the terrorists behead prisoners, so we must up our violence—isn’t conservative.  Massive tariffs that would devastate our economy certainly isn’t conservative.

Now, I’m not writing as a “NeverTrump.” Nor am I “NeverHillary”. Rather, I think this presidential election is silly nonsense.

What I am suggesting, as I’ve have before, is that this election creates an opportunity for true conservatives to talk about what a real conservative-libertarian agenda looks like.

Here is an agenda we should be talking about.
Disagree with anything on my list? Fine—lets debate them, because then we’ll be talking about the issues and not about Trump’s latest insult or Clinton’s latest lie.

We need to focus on the ideas that will make America greater than it already is.

Posted by Nathan Benefield at 3:15 PM No comments:

I've been pondering the story and lessons of David and Goliath recently.  Mostly commonly, people take from David vs. Goliath the lesson...